Summer time is the perfect time to get outside and explore. Our aim is to identify, measure and report on Science, especially Physics, that we come across during our September Challenge, however, there are already a huge range of science-related projects set up by each of the National Parks. From habitats to erosion, climate change to astronomy, there is plenty to appeal to everyone.

So if you are looking for fun and interesting ideas to fill your time or an extra focus to your visits in the Great Outdoor Doors, it would be well worth taking time to check out the Education and Activity pages of the National Parks websites, using the link below. Enjoy!

In Britain, it’s hard not to head into the Great Outdoors without thinking about the weather. A favourite topic of our nation and rightly so since being an island, our weather system is very changeable so always a good filler if short of things to say! But why is it so changeable?

There are many factors involved in weather formation (and prediction) so let us focus on a key one, air temperature variation. Heating of the Earth’s surface by solar radiation is not even. At school, we all learnt about the tilt of the Earth on its axis, approximately 23˚, leading to the Equatorial Regions receiving a greater proportion of the Sun’s ray, and hence solar energy, than the Polar Regions. They are simply closer to the Sun. This results in large-scale currents forming in the air and in the oceans, carrying thermal energy from low to high latitudes (Figure 1 below). 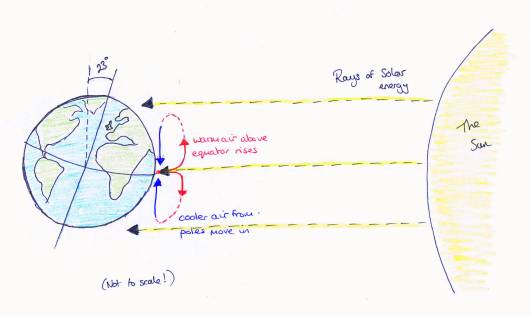 Figure 1: The tilt of the Earth causes globally uneven heating from solar radiation

At the Earth’s surface, each time a ray of sunlight hits, some of the thermal energy is absorbed and some is reflected, causing localised heating from the absorbed waves. The amount of energy that is reflected depends on the brightness of the surface. This is known as the Albedo Effect. Measurements of a surfaces ‘albedo’ can vary from as much as 10% for watery surfaces to 90% for fresh snow. Another way to look at is that if only 10% is reflected by water, then 90% must be absorbed by it, causing it to heat up more than fresh snow. However, since water is also transparent, this absorbed energy is spread evenly throughout it so when water is compared to other surfaces of similar albedo, such as dark areas on land, it will heat up more slowly. This leads nicely onto explaining how sea breezes form around our coastline.

Figure 2: Different heating rates between the land and the ocean causes convection currents, which we feel as sea breezes

Figure 2 above show the differences in heating effects of land and ocean. As the land heats up more quickly, the air above it becomes warmer than the air above the sea. Another fact that you may have remembered from school, is that warm air rises! So the warm air above the land rises upwards, leaving space for the cooler air over the ocean to move in. The beginnings of a convection current. Other examples of convection currents can be found in the ocean and within the mantle layer of the Earth. Although the movement of air is invisible, you may see the result of this convection current in the form of clouds as the warm air eventually meets cooler air at altitude, condensing into small water droplets.

The coins will conduct heat at a faster rate from the hot plate to the dish, causing localised hot spots. The soap solution above the coins will heat up more quickly, causing the solution to rise up, similar to the air above a sea shore. The cooler soap solution from other parts of the dish move into fill the spaces left behind, resulting in the beautiful patterns forming in the dish. The pearlised soap contain metallic particles that help to reflect light, making the convection currents formed easier to see. The food colouring does likewise.

After many discussions about logistics and routes, we agreed to start our challenge in the south of the UK. Our plan is to warm ourselves up for the mountains of the north. However, having looked in detail at some of the route profiles; particularly that of the Exmoor Coastal Path, some southern routes may actually prove to be more demanding! The slideshow below gives you a brief overview of what we have in store.

With the beautiful wetlands of the Norfolk Broads, the undulating hills of the South Downs Way and the majestic woodlands of the great New Forest, we can’t wait to get going.

After several months of promising that we will get down to the nitty gritty of detailed route planning, we have finally started work on it. The eight maps and route profiles included in the slideshow below give you an idea of our chosen marathon routes for the north. What with three munros, the Yorkshire 3 Peaks, the Coniston marathon and a tour of Snowdon and the Cheviot to contend with, there will be plenty to keep us suitability challenged and amused!