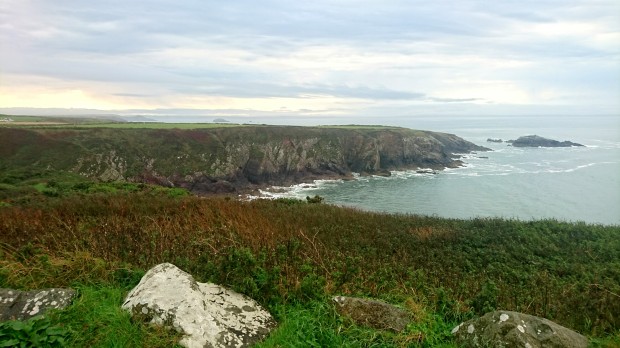 Our second marathon west of the border and our second coastal run; if Exmoor was a feast for the eyes, Pembrokeshire Coastal Path was a banquet for the other senses. The weather was a little less forgiving for this run so the views along the coast were not as clear and colourful as they could be. However, the lower elevation of these cliffs and hence closer proximity of the path to the sea meant that we could savour the smells and sounds more intensely. There is definitely something intoxicating and entrancing about the sound of the waves crashing on the rocks. With the cool northerly breeze gently buffeting us as we ran, it was only our taste sense that was denied any fulfilment. Easily rectified by some very yummy welsh cakes at the Ocean Café in Broad Haven!

Today was all about being kind to ourselves; our bodies feeling a little run down and battered from our efforts so far. Stocking up on vitamin supplements and healthy food, we needed a slightly easier day to allow our tired muscles a chance to recover in readiness for our back-to-back marathon coming up at the end of the week. Thankfully the Pembrokeshire Coastal path delivered a beauty for us. Although still undulating, like all cliff-top routes, the amount of ascent and descent was relatively small. With underfoot being grassy and soft, our legs took a little less of a hammering compared to some of the other routes so far. 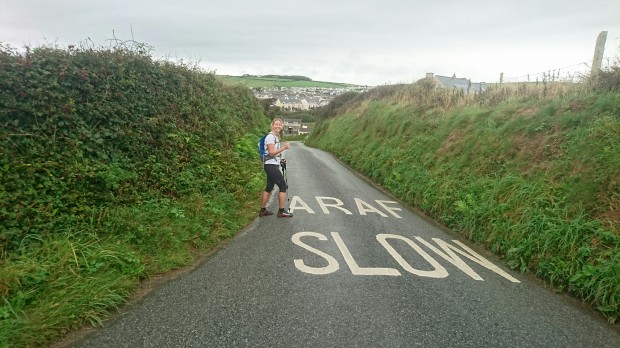 We started comfortably at 9:20am from Martin Haven, after a quick car shuffle from St David’s. Again, our support network has been fantastic, this time in the guise of John Williams, a fellow fell runner and friend of Claire’s. Like my parents had done for us in Dartmoor, he had come down a few days earlier to recci the meet points and water stops so already had a clear idea of where best to park; invaluable information! We are constantly amazed by the commitment our friends and family have given to our Challenge in order to help us achieve.

The Pembrokeshire Coastal Path is a thoroughly enjoyable path to run along, just the right amount of technicality to keep you alert but easy enough to be able to relax and enjoy your surroundings. Even the rain abated for our start with the sun trying to break through in the distance. We made good progress as we trundled towards Little Haven, our first meeting point with John. The rock strata along this part of the coastline is impressive, with the steep inclines of the bed rock clearly showing the shear forces that this area has undergone in the past. All highly exciting for closet geologists like us! Passing through a small woodland of wild pear-like fruit trees sheltering amongst the taller oaks, we knew that we could not be too far away from Little Haven; aided by the fact that despite the mistiness of the weather, we could still the main settlements along the coastline, including our penultimate destination of Solva. Post water-stop and buoyed on by the lure of a cup of tea in Broad Haven, Claire and I experienced the quick Welsh wit as we ran through Little Haven. Most people smile encouragingly and offer positive words to us as we pass by. One guy however, made us laugh out loud as he made a joke in reference to our poles.

“You’ve lost your skis have you?”

Brilliant! I think I mentioned in the last blog that our trekking poles have become invaluable and permanent pieces of kit for our runs now. I guess we do have a bit of a look of Nordic walkers / skiers about us!

With so many colourful towns along the coast to tempt us to stop, it took a good amount of will power and determination to continue to our main refuel stop in Newgale. Ok, enough of my rambling…. Over to Claire!

Newgale beach stretched out before us as we descended down onto it. Windsurfers, a school surf club and dog walkers were all making the most of the sea, sand and surf. I was desperately trying to put the pain that I was feeling to the back of my mind so that I could let my senses tune in and capture the images and sounds of waves crashing on the shore. I have always loved being by the sea and I like to savour moments such as these.

Pam and John were being very supportive as we carried on along the beach; John bringing water over from his car and Pam offering constant words of encouragement. We agreed to meet again in Solva, a picturesque village about 5 miles further up the coast. Pam and I marched off with our poles in our hands and started the ascent back on to the cliff top. Our motto up to this point had been ‘More tortoise and less hare’. Well, I was feeling ‘More snail and less tortoise’ as the path levelled off and I had to stop Pam from breaking into a run. Her GB triathlon training and interest in the physiology of the human body has put her in good stead for endurance challenges such as the one we were attempting. She offered sound words of advice as I questioned why a pain in my left leg had reduced since taping it up, only to be replaced by a much worse one in my right leg!

Having cut off some corners earlier on in the day, we were both a little concerned that we would not hit 26.2 miles by the time we reached my van at St David’s. Pam always likes to stay true to her word and had me marching around every headland we passed just to guarantee than we hit the magic number! As we drew close to the end of our marathon and the van came into view on the horizon up ahead, the weather closed in around us. Our jackets came out and protected us from the wind and rain that lashed us. Knowing looks were now the the only source of communication as we marched on for the last 2 miles. The headland seemed to go on for an infinite distance as it cruelly went up and down and then looped around when we thought the van was within grasp.

Wet, relieved and happy, Pam kindly praised me for getting through the day. I was just grateful for her patience and for sharing another fantastic adventure with me. The Pembrokeshire Coast was familiar to me as I have had many climbing adventures here. However, the secret beaches and coastal cliffs which joined them were not and it has been great to have had an opportunity to explore them. We were fascinated by the plethora of sporting and environmental examples of where Physics and Science could be brought to life. Besides the numerous climbing opportunities along the cliffs, which utilise forces, equilibrium and momentum, we spotted several sea-goers (swimmers, surfers and wind-surfers), all using basic Physics principles to succeed in their chosen activities. Environmentally, the Pembrokeshire National Park had clearly embraced renewable energy resources such as wind turbines and solar panels. An interesting website, called Darwin Science (www.darwincentre.com) has information on the Carew Tidal Mill, a local National Park managed centre to educate all about renewable energy resources and modern methods of energy production. This is worth checking out!