Based on our previous experience of the remote and wild Northumberland National Park, we always knew that this would be one of the toughest marathons out of our Challenge and we were not disappointed! Boggy terrain, disappearing paths and over-zealous cows are only part of the story, but more on than later. Put it this way, this marathon kept us on our toes! However, we were incredibly lucky with the weather and very relieved since neither of us was keen to revisit past experiences of poor visibility, super strong winds and needle-like rain!

Aware that psychology plays an enormous part in any adventure, we had treated ourselves to a second sports massage, this time at Scarborough Sports Massage Clinic. Understanding our plight, Christian Machen expertly manipulated out the knots and tightness that had been building in our legs and bodies over the past few runs.  A big thank you Chris!

On top of this uncomfortable but much appreciated luxury, we had made the decision earlier in the week to walk this marathon. It would give us more time to navigate, which we knew could be particularly challenging over and through the heather covered moorland. Oh, and being gluttons for punishment, we were also wanting to get some good data on the effect of sugar on energy levels during an endurance activity. This had been our plan during the New Forest marathon but the humidity seemed to have affected the blood sugar monitor. Since neither of us wanted to suffer any more than necessary when playing around with our nutrition, nor to be the one to have to drag the other round on a tougher course because of said nutrition, walking seemed to be the sensible choice.

So one of the first tasks of the day was to measure our blood sugars before we could eat breakfast; everything we ate and drank for the next few hours would need to be recorded, along with timings so we could correlate this information to our blood sugar readings. Again, Claire was on the more balanced protein-carb-fat diet of porridge with cheese sandwiches for snacks, whilst I had the pleasure of consuming a breakfast of 500ml of Lucozade Energy drink, supplemented on route with fruit snacks! Mmmm! 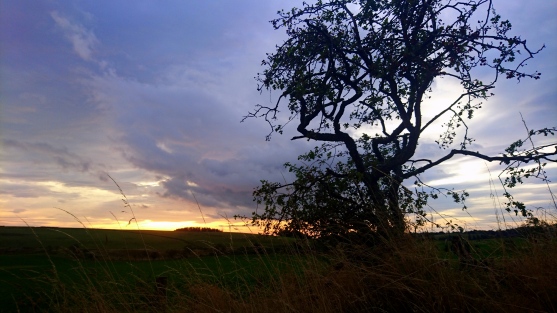 We were conscientious that daylight hours were shortening and we had approximately 1200m of ascent to climb, so it was going to be a long day and we needed a much earlier start. A beautiful red sky greeted us as we drove to our start point in Ilderton, to the east of the Cheviot. This part of the Northumberland National Park is much less popular than the region to the west, where its highest peak and the Pennine Way capture the attention of many walkers throughout the year. With this in mind, navigation was always going to be more challenging, though we had not quite realised how much. No sooner had we started before we stumbled into our first obstacle; a perfectly clear bridleway disappearing into a sea of heather and bracken, only to be replaced by numerous sheep-trodden tracks.

“Any idea which way it went?”

“Er, no! The map implies that we should just keep heading that way,” as we stared across the purple and brown carpet. And so we did, our ankles sinking amongst the clumps into shin-deep mud, as were our energy levels. Finally spotting a post, the top half-covered covered in yellow footpath signs, we tramped our way over, fervently hoping that this will lead us back onto a decent path. Great! It did and in the right direction so off we set again. Five minutes later though, we were back in the same situation again; this path disappearing to nothing and no clear way to head from there. We could not even use sheep folds or fence boundaries to locate ourselves since there seemed to be hundreds all over that did not fit to the map.

“Right, the only thing that cannot be wrong are the contours. No one can move the mountains,” Claire sagely stated. Back to basics; macro-navigation of key landscape features and good old compass bearings. By this stage, I was next to useless as the sugar high from my Lucozade breakfast had turned about face into a sugar low. Along with plummeting energy levels, my concentration and mental processing skills were dropping off quickly. The only that was increasing was my headache! This all meant that any sensible decision making and pace setting was left to Claire. If you are interested in our results, see the graph below. 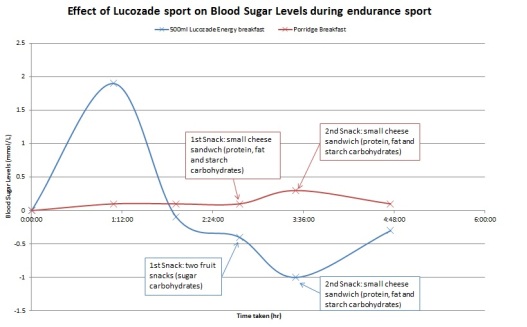 It was with a massive sign of relief from both us when we reached 11am and our designated time to finish this experiment; me to be able to have some real food and Claire to have a functioning partner again! We had also got beyond the most challenging navigational section of the route, another big bonus. Fuelled up on cheese sandwiches, we started the ascent, this time of much clearer tracks, up to the Big Cairn and High Cantle. Our destination was Salters Road through the forest, heading towards the Pennine Way where we would do the main part of the ascent up to the summit of the Cheviot. Despite the gradient, we significantly picked up pace, showing clearly how the terrain underfoot made such a big difference to our speed; and how the consumption of food made such a difference to our energy levels and morale.

Half-way through the forest and with nine miles under our belts, we finally met other people out walking. A chatty couple from Tyneside who were trying to retrace their steps from an earlier visit to Davidson’s Lynn but doubted whether they were on the right track. A quick look at the map helped to confirm that they were; a good thing since we needed to be on the same track ourselves. 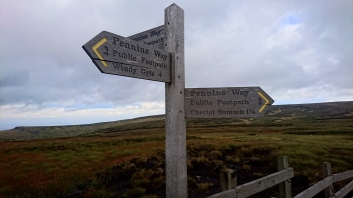 Finally reaching the Pennine Way, both of us were surprised and immensely relieved to see the flagstone path extending ahead of us. Our distant memories of walking this path had dredged up images of bog after bog, something we had secretly been dreading but too afraid to voice to each other. It seemed in 2013, the National Park Authority had put in some very hard labour to build this path, kindly funded by Natural England and for that we were truly grateful. We almost skipped up to the summit, where we met two lovely ladies, equally wind-blown and dishevelled but on good form. With the weather still being kind enough to allow us fantastic views across this remote and wild National Park, it was clear to see how Northumberland takes the crown as the largest Dark Sky Status Reserve in Europe. There are hardly any settlements to create light pollution and it was a shame that we could not afford the time to visit this secluded area at night. The view of the stars and the Milky-Way must surely be amazing from here.

Commencing our walk from the summit over to the edge of the plateau, we were pleased to see further flagstones stretching out into the distance. The Northumberland National Park really have gone to the sterling effort of laying stones down for common walking routes, one of which we were now on. Standing at the edge of the plateau, we could see the descent down into the picturesque valley below. We were eager to get down as were feeling drained and tired from being battered by the wind all day. Briefly breaking into a trot we started our descent down and let our tired legs roll. This was short lived as our bodies had got so used to the more sedate walking pace that they were groaning at us to slow down. We had learnt to listen to our bodies at moments such as these so reigned ourselves in. We were aware that there was no need to rush as we were making good time.

It was not long before we were down and sheltered from the strong gusts that roared on the summit above. Tired but happy, we smiled at passers-by as we carried along the valley. We commented on the strength of a runner as she easily strode out past us. We quietly envied the energy and vitality she possessed and looked forward to the day when we would be that bouncy again!

Reaching the end of the valley, we took on-board some more food and water before starting the last 4 miles. We were happy to be off road and onto a soft grassy surface again but our contentedness was short lived. Having walked past many fields with cows, calves and bulls in during our marathons, we had got somewhat cavalier about walking through fields of them. Confident in our approach we set out across another full field, the cows were clearly unhappy about our presence and started making noises at us as their calves became a little spooked. A bull suddenly appeared and started approaching us. We made noises at it but it wasn’t backing down. As it broke into a run, I called out to Pam, “Go up the hill!” I heard a shout behind me as Pam slipped whilst making headway for the hill. I had a sick feeling in my stomach as I reached the fence line and turned to see what had happened. Relieved to see her back on her feet again and the bull stood stationary at the bottom of the hill, I started to climb over the fence with Pam close behind. On edge after our close call, we chose to follow a fence boundary around the herd rather than face the might of these anxious animals. They had made it clear that we were not welcome and we did not want to upset them again!

Eventually reaching the ruins of Middleton Old Town, we slowed down to reflect on the history that had been created here. Lying on the boundary between England and Scotland, this county has witnessed many battles that have shaped the land and lives of its people. With the clock ticking, we drew ourselves away and continued on.

We questioned our luck as we went through a gate and realised that we were now in a field of inquisitive bullocks. Keen not to have another near miss, we kept an eye on them as they stared at us intensely from the top of a hill. Aware of how fast they could run, we kept close to our escape route, a nearby drystone wall as we ventured along the track. Safely through the gate on the other side, we decided that we had had enough cow experiences for one day.

With IIderton in sight, the van soon came in to view. Tired and weary, we had a quick change before seeking the refuge of the van. Due to its remoteness and difficult terrain, we always knew that this would be a difficult marathon to conquer. Its challenge had certainly not disappointed us and although unlucky for some our 13th marathon had proved otherwise. We had had a number of lucky escapes that would no doubt be remembered over a drink or two in years to come! Thank you Northumberland for making our day such a memorable one!

One thought on “Our Northumberland Venture”