Croeso i Cymru! The first of our marathons through the three beautiful Welsh National Parks started with a mountainous route in the Brecon Beacons. Both Claire and I have made plenty of visits to this popular National Park with our friends, families and especially Duke of Edinburgh groups since the terrain offers both amazing views and challenging routes to test anyone’s hiking and navigational skills. It is even an area famous as the ‘playground’ of the British Army, which is enough to give kudos to any mountain region! 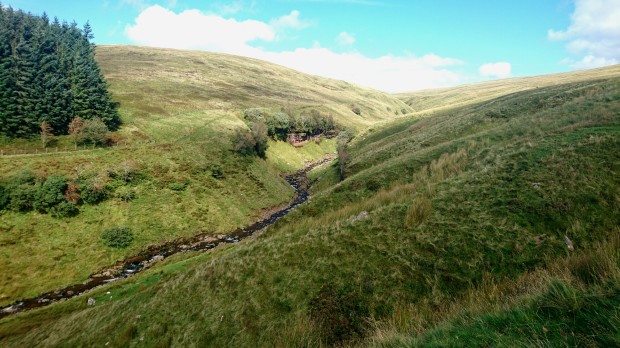 We started the day with a very early start, due to a two hour drive from our overnight stop to Pencelli. Loading up on our daily breakfast juice, bagels and coffee, we made good progress up the M4 to our start point. The weather was being incredibly kind to us again with the sun glowing golden across the countryside. We were grateful for the cooler temperatures too, even contemplating the use of gloves for the beginning of our run. Parking up, we had our usual 10 minutes of faffing before setting off westward on our slightly changed route along the Three Rivers Ride. Originally our route would have been a mammoth 30 miles, even without taking into account all the extra wiggles that the mapping software could not pick up. Not massively keen to overdo each day, a quick pow-wow was completed the previous night. Deciding on a new shorter route we did not feel as if we were ‘wimping’ out of these extra miles as the intricate network of tiny country roads and footpaths of the rural communities kept us working hard on our navigation. A sharp reminder of the difficulties Duke of Edinburgh groups often face trying to get out of a village setting at the start of their expeditions!

After our positive experience of using our trekking poles on the Exmoor route, not only to reduce fatigue of our legs during the run but also for the benefits in our recovery afterwards, we were fervent pole converts! Once perceived (and wrongly so) as equipment for only the old and unfit, there has been an almost seismic shift of opinion over the past decade towards the benefits for everyone. If you have ever had the opportunity to watch one of the major ultra-marathon events, such as the incredible Tour du Mont Blanc, a 170km epic with 10km of ascent and descent around the highest mountain in the European Alps, you could not fail to see the popularity of poles amongst the hard-core runners taking part in the event. Even carrying just one pole significantly reduces the force on their legs and increases their stability over the technical, uneven ground. If poles are good enough for these amazing athletes, then they are definitely good enough for us. We are hoping that the use of these, in addition to our daily stretching and strategic taping, will allow our tired muscles to carry us through this challenge. As Physicists in the Outdoors we are keen to look into the science behind the range of outdoor equipment that people find essential up on the hills; trekking poles will definitely feature as part of this research.

A couple of my friends, Jane Fox and Lizzie Wilkinson, were keen to join us over the mountainous section; two more of the many friends and family members that have given us immense support so far this month. We had arranged to meet up with them outside the Storey Arms Outdoor Education Centre,  about 10 miles into the run, giving us the opportunity to put the bulk of the road miles behind us before the fun began; always the hardest part for us off-roaders. As we approached the meeting point, Pen-y-Fan and Corn Du sitting magnificently on our left, we heard an enthusiastic rendition of ‘Happy Birthday’ coming from two waving figures on the green outside the centre. I should also mention at this point that this marathon fell on Claire’s birthday, a true sign of commitment to the cause! It may not be the choice of some people but I am sure that to many fellow outdoor enthusiasts, this must seem a pretty fun way to spend your special day; surrounded by beautiful countryside and other happy, optimistic explorers.

Not only had my two friends given up their own time to keep us company but had kindly brought along much needed water for us to fill up with as well as some awesome cookies, baked by Lizzie. Scoffing a couple of cookies, along with a quick cup of tea and we were ready for the climb ahead. Even walking up the main track, my heart rate was close to the maximum that we wanted it to be. Mostly because I was trying to keep up with a super fit Jane, who not only set a fierce pace but also managed to keep a constant flow of conversation going the whole time. Thankfully she did not ask too many questions of me, allowing me to concentrate on my breathing! 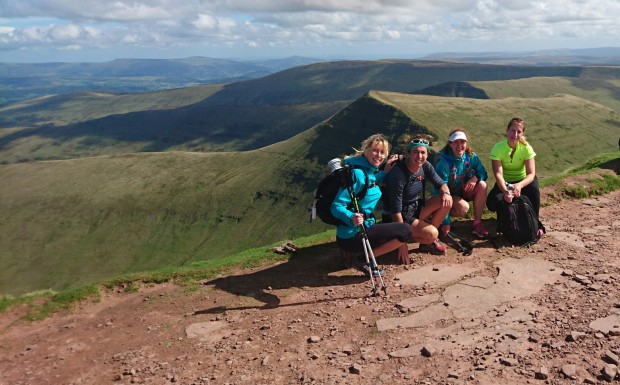 At the top of Corn Du, we had a magnificently clear view across the surrounding mountains and valleys; an absolute paradise for any physical geographers with the deep U-shaped glacial valleys and younger, meandering rivers formed at their bases. Feeling the freshness of the wind at this height, we quickly pulled on our jackets before jogging along our newly chosen route, across to the summit of Pen-y-Fan, then downhill and uphill to Cribyn. On the theme of outdoor equipment, we decided to try out Claire’s four man shelter on our next food stop. Five totally hilarious minutes followed as firstly Jane and Lizzie rolled about trying to get into a sitting position inside the orange protective shell, their arms and legs flailing everywhere. Claire went next, leading us to question the actual capacity of the shelter. Is it really meant for four persons?! These shelters are designed to be snug, to keep its users warm; however, there seemed to be little room for one more. Crawling on hands and knees, I managed to get head and shoulders under the shell before nose-diving onto the tangle of feet in the centre as I tried to manoeuvre the rest of my body in.  By this stage, all of us were giggling uncontrollably, the serious practicalities of this life-saving kit completely passing us by! Past experience has shown such shelters to be incredibly useful for safer and more comfortable hikes in the outdoors, especially in bad weather, but on this occasion, it was all about fun! 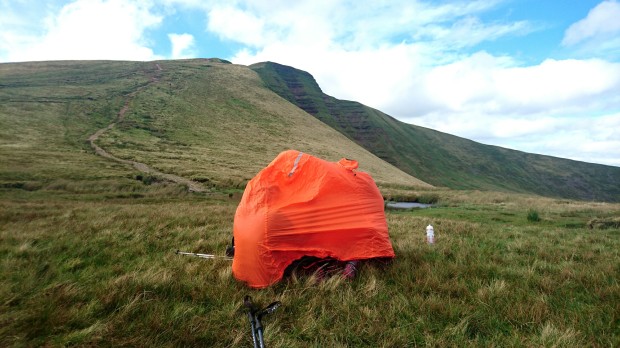 We did not last long in the shelter; its effectiveness at keeping us warm proved to be too much. Needing to move, we trotted down to by-way at the foot of our final big ascent, Fan-y-Big. After a short, steep climb to the top it was time to say goodbye to our two companions. The next part of our route was along a north-east spur from the ridge line, down to Talybont Reservoir. Even in clear visibility, we felt more comfortable taking a bearing to ensure that we did not run any unwanted extra miles. Drinking in our final views of these beautiful mountain ranges, we dropped down to the road before putting our heads down for two miles of tarmac. At the soonest opportunity we re-joined the Taff trail, through the forest and down into Talybont-on-Usk. With the fast forest trails an absolute relief after the hard road, we could open up our stride and enjoy our remaining five miles. A few distracted minutes due to some impressive bridges along the Monmouth Canal aside, we finally returned, weary but happy to the van. Six down; 40% done; 2/5ths achieved. It’s starting to feel that we will survive. Beyond the Challenge, a lovely birthday for Claire, topped off by a beer bought for her by Chris, the hostel guy at Brecon Beacons YHA. His friendly welcome and quick wit was a good pick-me-up for two tired runners. Thank you, Chris for allowing us time to shower before dinner. I am sure that the other diners fully appreciated it as we smelt a lot nicer than we would otherwise have been! 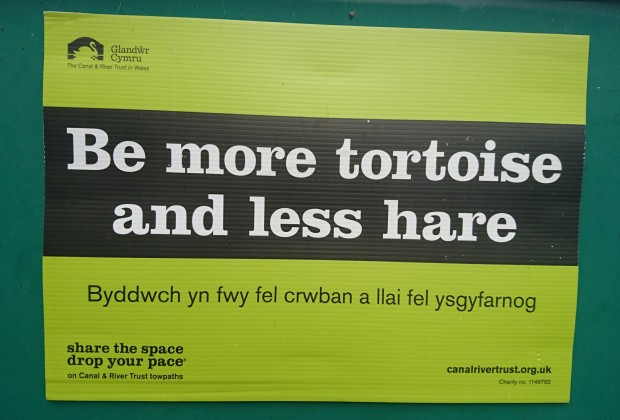 We found a sign of our motto on the Monmouth Canal. Fantastic!