Route: From Pickering to North of Goathland, 28.0 miles

The North York Moors with it’s fantastic coastline and moorland is somewhere we were both keen to explore. We both had distant memories of the region and were looking forward to re-awakening them. On the morning of our run, we were both a little nervous as to what the day had in store. We were dependent on a friend’s (Martin Kocsis) goodwill to make it a success. Not only did we need him to pick us up half way through our route to take us to a pre-arranged meeting with the North York Moors Education Officer, Sue Wilkinson, we also needed him to drive us back to Pickering. We should not have worried, Martin and his trusty dog Frank proved to be excellent support and hosts for this park!

With rain drizzling upon us as we sat in the car park at Pickering waiting for Martin, we wondered whether or not our rain jackets would have to make a rare outing. We had got so used to sunny running conditions that the threat of a rainy day was having a bigger effect on our spirits that it should have done. Our frowns turned into smiles as Martin and Frank pulled into the car park. Martin was a big fan of the region having spent many happy days holidaying here in the past. His enthusiasm rubbed off on us as we got our selves sorted, explained our plan and set off in to the drizzle for our day’s adventure. Within minutes the rain had stopped and we had the smoke of a distant steam train in sight. We marvelled at it from afar as we drew close enough to get a couple of pictures. Keen to keep on schedule for our visit with Sue, we hurriedly packed the camera away and continued on route.

Route planning, pacing and timing, all applied physics topics, were something that we had got increasingly good at during the past 3 weeks. As a core skill of a competent Mountain Leader, we both had experience of using these skills in the recent past. However, neither of us had had any experience of completing so many marathons in such a short time frame and as such our pace had to be modified. We also had little knowledge of some of the terrain that we would encounter and were concerned that the North York Moors would be exceptionally boggy underfoot; sapping our energy levels and hindering our progress. To allow for these unknowns we had factored in plenty of contingency.

Keeping to our moto of ‘walk the ups’, we took our time as we climbed out of Thorten-le-Dale, through the forest and up onto the ridge. The height gain was only 200m and slight compared to our previous marathons effort. We chatted merrily as we reached the ridgeline and marvelled at the North York Moors laid out before us. Multiple shades of yellow, green and brown rolled into the distance and shimmered in the sunlight; we could see why so many people loved these moors. We discussed how different the shape of the landscape was from the Lake District in the West, to The Yorkshire Dales in the middle of the country and the North York Moors in the East. Each park had its own discrete characteristics and unique charms that had left lasting impressions on us. Much to our delight the chalk tracks underfoot made the running easy. We drifted along at a good pace taking care not to run too fast and burn out later as a result.

With our energy levels dipping and the sun occasionally popping out from the clouds, Pam compared us to road runners. These are birds which harness the warmth from the sun so that they can break into a sprint. Chuckling at this thought, we saw two runners approaching us. Armed, like us, with poles and taped knees they smiled and nodded before shouting “Hello fellow idiots!” at us. Pleased to be in the presence of like-minded souls, we shared in their joke before carrying along the Tabular Hills Walk.

Myself as time keeper and Pam as distance master, we could see that we were making good time and were likely to get to our first rendezvous point with Martin about 30 minutes early. A short phone call was made and we agreed to meet with him a little earlier to give us more time to recharge our batteries and rest our tired legs. Within an hour, we could just make out the outline of Martin and his husky, Frank on the horizon. They were slowly walking along the track towards us. Pleased to have an excuse to walk, we hurriedly ran towards them before slowing to a more sedate pace. With the sun now shining brightly upon us, we shared stories of our mornings adventures before piling in to Martin’s van.

So Martin kindly drove us both to Aidensfield… or rather Goathland as it’s known by the locals. This enchanting village has been the set for the Sunday evening favourite, Heartbeat for nearly 20 years. On route we had excellent views of the moorland that would be our playground for the afternoon. The familiar sights of the Aidenfields Arms and garage were standing proudly at one end of the village; both buildings the focus of many photos. As was the police car, which was currently parked up in front of the village post office and information centre since its usual location in front of the garage was taken over by a small market on this occasion.

To make room for Claire and I to fit into the van (safely), Frank had to be relegated to the back of the van for the short journey, much to his disgust. However, he was obviously not one to hold grudges for long since he happily turned on the charm once again when the cream teas arrived. With a quick half hour spare, we had all decided to test out the local delicacies, whilst lazing in the sunshine on in the small green outside and making sure that all scones were out of reach of Frank’s dextrous paws!

The short break over, it was then time to meet up with Sue. This called for a second cup of tea and the more business-like setting of the tea rooms. Like all of the Education Officers from the different National Parks that we have met so far, Sue is incredibly enthusiastic and motivated about increasing the opportunities for families and schools to experience the beauty of these special places. Her knowledge and passion for this understated but truly captivating Park is second to none and it was fascinating talking to her about the numerous projects that the North York Moors National Park Authority has on the go. One such project is the Explorer Club, an opportunity for 5-14 year old children and their parents to meet up and learn more about the Moors over six sessions. The success of this project clearly shown by the continuing involvement of these families with the Park and their own exploring even after their designated period of learning has finished.

This is only one of many schemes that are available for children to become more engaged with the outdoors in the North York Moors (www.northyorkmoors.org.uk). As teachers who passionately feel that learning about Science and Physics should not be only restricted to laboratories, it was very encouraging to meet someone who has been so actively involved in establishing strong links between education and opportunities in the outdoors. Both of us were impressed by the amount of research into this special peatland environment that is already taking place. Despite very much enjoying our conversation with Sue, we were conscious of time pressures; Sue had kindly taken time out her day to meet with us and we still had another 6.5 miles to do!

So shuffling back into the van, (Frank again in the back!), it was time to head back to the view point at Saltergate. If the morning had been all about forest trails and farmland, the afternoon was very much about the moors. Starting with a quick jog around the Fylingdale RAF Base, most likely monitored by several CCTV cameras, we soon hit the chalky trails of the Worm Sike Rigg bridleway. The short climb uphill opened up to wide open moorland, the heather and moorland plants turning slightly golden in the lower autumn sun. It almost felt as if we were running through the plains in Spain, only the cooler northerly breeze reminding us of where we really were! It really is a very magical environment and we were incredibly lucky to be able to experience it in such beautiful weather.

The chalky trails turned to peaty-sandstone paths as we passed the trig point and turned onto Foster Howes Rigg. Although much more uneven and boggy, we still managed to hold a reasonable pace, the lure of the end now in sight. We were quickly realising that the 6.5 miles that we thought that we had to do, was now nearer to 8.5 miles so we were incredibly grateful to see the friendly faces of Martin and Frank as the path neared towards the A169.

Fantastic, number 12 done! All we needed to finish off this wonderful day were three very tasty portions of fish and chips (with a large sausage for Frank, of course) and a short stroll around Whitby.

A big thank you to Martin for all the support and for the guided tour of Dracula’s home town; perfect! 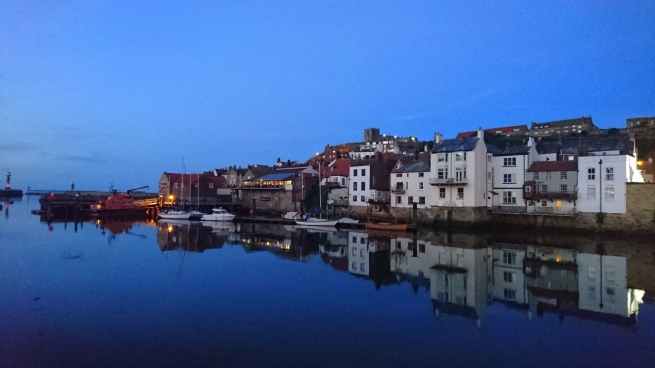